Associated Builders and Contractors (ABC) reports that its Construction Backlog Indicator (CBI) contracted to 8.8 months during the first quarter of 2018, down 9 percent from the prior quarter. CBI is down 2 percent on a year-over-year basis. 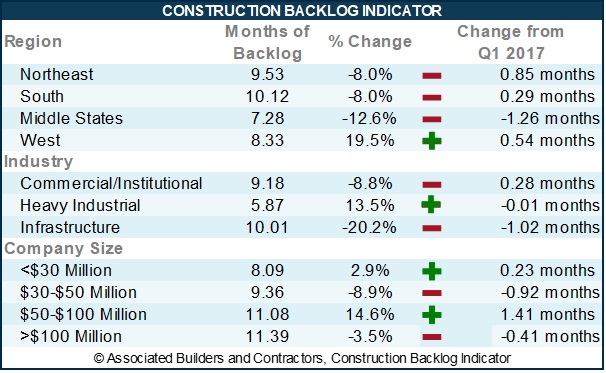 “The Construction Backlog Indicator hit an all-time high during the fourth quarter of 2017,” said ABC Chief Economist Anirban Basu. “A number of factors pushed backlog lower during the first quarter of 2018, including an extensive winter. Only one region has experienced a decline in backlog on a year-over-year basis: the Middle States, which encompasses the Upper Midwest. There also was a significant uptick in survey participation during the first quarter, which may have helped shape the result. In sum, average backlog remains lofty by historic standards.

“Given improved weather and normal seasonal factors, it is likely that backlog will bounce back during the second quarter. However, the level of improvement may be undermined by a combination of worker shortages and rapidly rising construction materials prices. Despite recent increases in the costs of delivering construction services due to rising human capital and materials costs, there is scant evidence of a decline in demand for construction services,” said Basu.