Despite ongoing concerns regarding labor force availability and rising interest rates, and emerging concerns regarding tariffs and construction materials prices, construction contractors emerged from the first quarter of 2018 with tremendous confidence, according to the Associated Builders and Contractors (ABC) Construction Confidence Index (CCI). Each of the three indices—sales, profit margins and staffing levels—increased during the first quarter and remain well above the threshold reading of 50.

“For now, contractors remain in high demand and generally have significant pricing power relative to prior years,” said ABC Chief Economist Anirban Basu. “This should not come as a surprise. Backlog remains elevated by historic standards, both public and private construction spending continue to increase, and the economy has added jobs for a record-breaking 92 consecutive months, triggering demand for many types of nonresidential construction, whether in the form of office buildings, hotels or data centers.”

“That said, the CCI survey was conducted during the first quarter of 2018, when tariffs were being discussed more theoretically, and prior to a recent surge in materials prices,” Basu said. “More recent events suggest that a trade war among the United States and other trading partners, including China and Canada, is becoming more likely. Borrowing costs are also on the rise, with the Federal Reserve continuing to raise both the Fed Funds and discount rates. It is therefore conceivable that we have seen the peak in contractor confidence or that a peak is approaching.

“On the other hand, nearly 60 percent of surveyed firms expect profit margins to expand over the next two quarters, while less than 13 percent anticipate a decrease. Only 6 percent of surveyed contractors anticipate a decrease in sales volume, while nearly 80 percent expect an increase. This is especially remarkable given the inherent lumpiness in construction spending, with contractors often experiencing sharp decreases in construction spending volume as important projects draw to a close. The most recent survey results are consistent with the notion that the marketplace is so active presently that contractors, including subcontractors, are able to flow from project to project. Not coincidentally, just 4 percent of contractors anticipate decreasing staffing levels over the next six months.”

The implication is that construction spending data should be quite solid during the next two or three quarters. Importantly, nonresidential construction spending downturns generally begin a year or more after broader economic performance begins to wane. While many economists warn of emerging storm clouds on the horizon in the form of rising inflationary pressures and greater asset price volatility, contractors and their peers can fully expect that 2018 will end up being a very fine year. 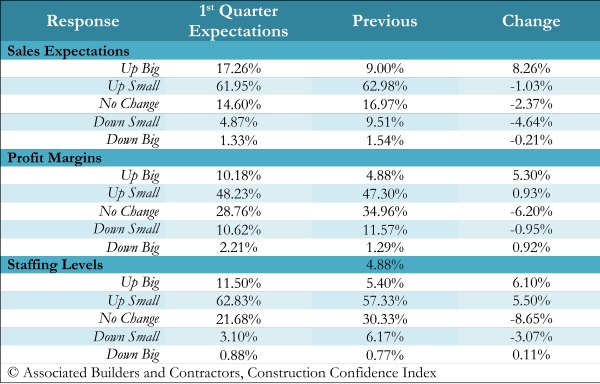