The construction industry added 21,000 net new jobs in June, according to an Associated Builders and Contractors analysis of data released today by the U.S. Bureau of Labor Statistics. On a year-over-year basis, employment in the industry has expanded by 224,000 jobs, representing an increase of 3.1 percent. Nonresidential construction employment gained 14,900 net jobs in June and is up 146,700 jobs during the last 12 months.

All major segments of nonresidential construction added jobs in June, with the bulk of job growth in the nonresidential specialty trade contractor segment, which added 11,900 net new positions. The construction unemployment rate stood at 4 percent in June, down 0.7 percent from the same time last year, and unemployment across all industries was 3.7 percent, slightly higher than 3.6 percent in May.

“Today’s employment numbers indicate the economy is not slowing nearly as quickly as data suggested earlier this year, which is promising news for contractors,” said ABC Chief Economist Anirban Basu. “With the U.S. economy now in the midst of its lengthiest expansion in history and many economists predicting a recession in 2020 or 2021, construction firm leaders are searching for any indication that the current economic and construction spending growth cycles are nearing the end. That said, today’s employment numbers suggest the economy will retain plenty of momentum into 2020.”

“In general, nonresidential construction spending tends to lag the broader economy by 12 to 18 months,” said Basu. “And as the broader economy continued to perform well during the first half of the year, even though economic growth slowed during the second quarter, this implies nonresidential construction spending growth will remain in place well into 2020 and likely beyond.”

“In short, the industry is still strong,“ said Basu. “Finding and retaining skilled workers remains a primary issue, implying that compensation growth will continue to increase. This is a challenge that construction firms share with firms operating in many other industries, which means that the cycle of wage growth coupled with robust consumer spending remains firmly in place.” 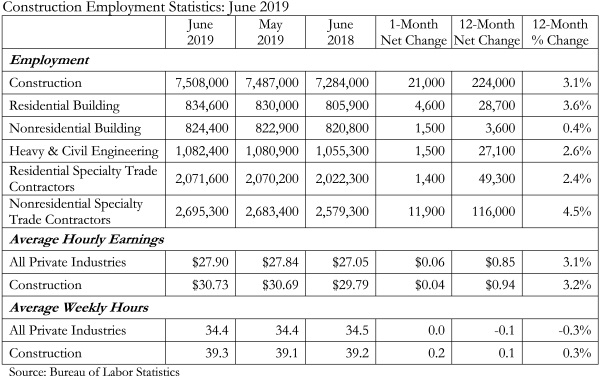