Commercial and industrial construction contractors entered 2018 with abundant confidence regarding sales and staffing levels for the next six months, according to the latest Construction Confidence Index (CCI) released by Associated Builders and Contractors (ABC). All three components surveyed—sales, profit margins and staffing levels—remained well above 50 in the diffusion index, signaling ongoing progress. But the average contractor is less confident about profit margins than they were a year ago.

“The CCI survey was conducted during the second half of 2017, when discussions about tax cuts were front and center, but before current debates regarding U.S. trade policy and tariffs on key construction inputs such as steel and aluminum,” Basu said. “These confidence readings are consistent with the notion that contractors are increasingly concerned by rising compensation and materials costs.

“Still, more than half of surveyed firms expect 2018 profit margins to expand, at least during the year’s initial half. While only about 5 percent expect significant growth in profitability, 47 percent expect some expansion in margins. This is symptomatic of a strong U.S. economy—one in which the typical purchaser of construction services is not discouraged by the rising cost of construction service delivery.”

“Among the primary beneficiaries of this strong economic dynamic and upbeat expectations are jobseekers. The construction unemployment rate has trended lower over time, and the most recent CCI survey indicates that the majority of firms expect to bulk up on staffing levels during the near term. Nearly 63 percent of respondents indicate they will expand their staffing during the next few months. By contrast, fewer than 7 percent expect to reduce company employment,” said Basu, “That is remarkable given the on-again, off-again nature of construction work.” 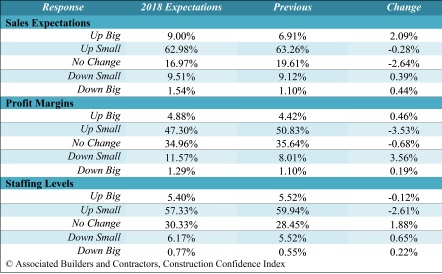