Estimated January not seasonally adjusted construction unemployment rates fell nationally and in 44 states, rose in four states and were unchanged in two states (Maine and North Carolina) on a year-over-year basis, according to an analysis of U.S. Bureau of Labor Statistics data released today by Associated Builders and Contractors.

“In January, all of the country experienced above-average temperatures with the Northeast, from Wisconsin and Illinois eastward, registering significantly warmer than normal weather. This aided construction activity and employment,” said Bernard M. Markstein, Ph.D., president and chief economist of Markstein Advisors, who conducted the analysis for ABC. “These numbers were collected before it was known that COVID-19 was in the United States and precautions, such as select cities and Pennsylvania shutting down construction jobsites, were taken to prevent its spread. The larger effect of COVID-19 on construction unemployment won’t be reflected until the March and April data.”

Because these industry-specific rates are not seasonally adjusted, national and state-level unemployment rates are best evaluated on a year-over-year basis. The monthly movement of rates still provides some information, although extra care must be used when drawing conclusions from these variations.

The states with the lowest estimated NSA construction unemployment rates in order from lowest to highest were:

All of these states except for Oregon were in the top five in December. For the second month in a row, Florida had the lowest construction unemployment rate among the states. This was also the state’s lowest January rate on record.

Maryland had the second lowest rate in January, the same as in December (tied with Colorado) based on revised data (originally reported as fifth lowest). This was the state’s lowest January rate on record.

Oregon and Utah tied for the fifth lowest rate in January. For Oregon, this was up from sixth lowest in December. This was the state’s lowest January rate on record. For Utah, this was the same ranking as in December based on revised data (originally reported as tied with Colorado for third lowest). This was Utah’s lowest January rate since posting a 2.6% rate in 2015. 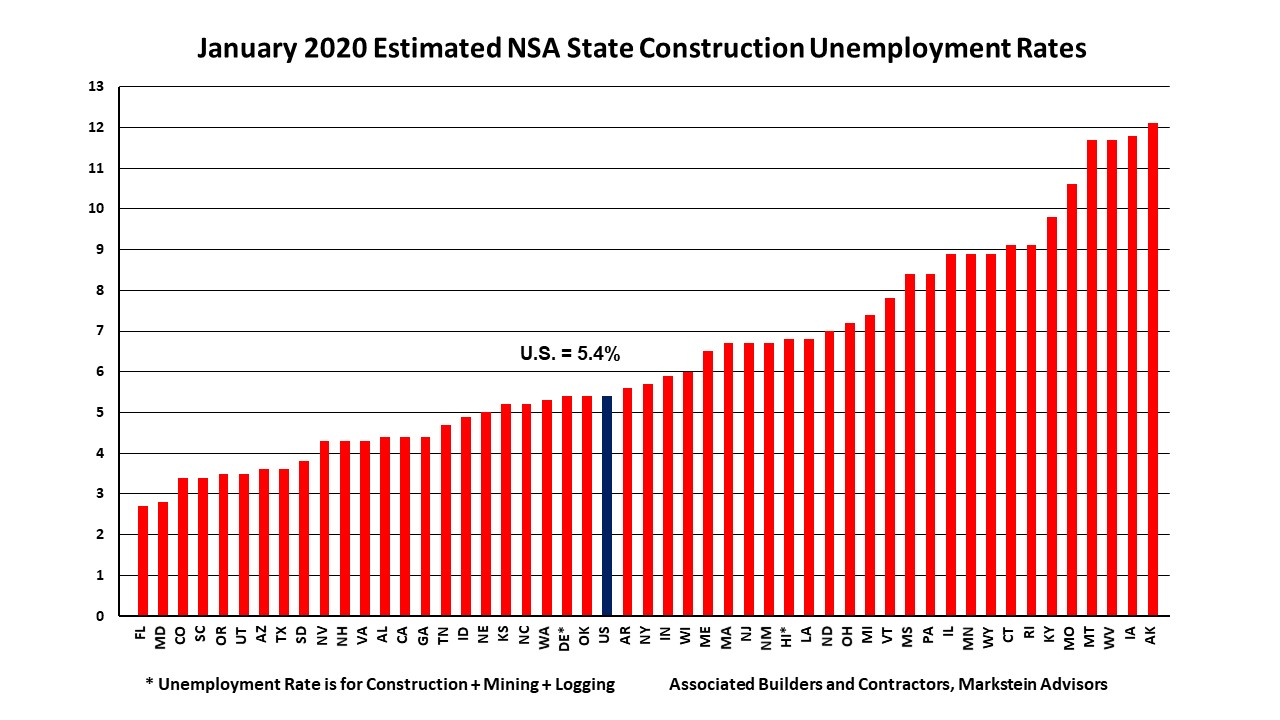 The states with the highest estimated NSA construction unemployment rates in order from lowest to highest were:

All of these states except for Missouri were also in the bottom five in December. Alaska had the highest estimated construction unemployment rate in January, compared to second highest in December based on revised data (originally reported as third highest). Nonetheless, this was the state’s lowest January rate on record. Also, Alaska had the second largest year-over-year drop in its rate (behind West Virginia) among the states, down 3.3%.

Iowa had the second highest rate in January compared to fifth highest in December.

Montana and West Virginia tied for the third highest rate in January. For Montana, this compared to fourth highest in December. Still, this was the state’s second lowest January rate on record, behind the 7.3% rate in 2007. For West Virginia, this was an improvement from having the highest rate in December. This was the state’s lowest January rate on record. Further, West Virginia had the largest year-over-year and monthly decrease among the states, down 3.5% and 1.7%, respectively.

Missouri had the fifth highest rate in January compared to sixth highest in December.

Wyoming, which had the third highest rate in December based on revised data (originally reported as second highest), tied with Illinois and Minnesota for ninth highest in January with an 8.9% rate. This was the state’s lowest rate since the 6.6% rate in 2013.

On March 16, BLS released its benchmark revision of state employment data from April 2018 through December 2019. The models used to estimate state construction unemployment rates were updated incorporating the revised data. The revised data and the updated models used in the January 2020 estimates resulted in some changes to the estimated state unemployment rates from January 2018 through December 2019.

To better understand the basis for calculating unemployment rates and what they measure, see the article Background on State Construction Unemployment Rates.

Visit abc.org/economics for the Construction Backlog Indicator, Construction Confidence Index and state unemployment reports, plus analysis of spending, employment, GDP and the Producer Price Index.
Associated Builders and Contractors is a national construction industry trade association established in 1950 that represents more than 21,000 members. Founded on the merit shop philosophy, ABC and its 69 chapters help members develop people, win work and deliver that work safely, ethically and profitably for the betterment of the communities in which ABC and its members work. Visit us at abc.org.