The construction industry added 4,000 net new jobs in July, according to an Associated Builders and Contractors analysis of data released today by the U.S. Bureau of Labor Statistics. On a year-over-year basis, industry employment has expanded by 202,000 net jobs, an increase of 2.8 percent.

Nonresidential construction employment lost 2,800 jobs on net in July but has still expanded by 122,300 jobs over the past 12 months. The bulk of the job loss came from the heavy and civil engineering segment, which lost 4,300 jobs on a monthly basis in July. Nonresidential specialty trade contractors added 1,400 net new jobs, while nonresidential building employment remained virtually unchanged.

“It is often said that employment is a lagging indicator,” said ABC Chief Economist Anirban Basu. “What that means is that the economy can continue to add jobs at a brisk pace even after it has begun to slow. Many economists will make the claim that today’s employment numbers reflect the economy’s past strength and are not indicative of its current condition. Perhaps, but that doesn’t change the fact that America added 164,000 jobs in July nor that more households have bolstered their spending power as a consequence. Labor force participation ticked higher, another positive sign.

“While today’s data were broadly upbeat, risks abound,” said Basu. “It’s difficult to establish which risk is the most serious, but the list is long: trade disputes, Iran, corporate debt, household debt, federal debt, elevated and vulnerable asset prices, and the specter of next year’s elections, which may induce many economic actors, including real estate developers, to embrace a wait-and-see posture. The election’s growing imminence may itself be enough to further slow U.S. economic growth.” 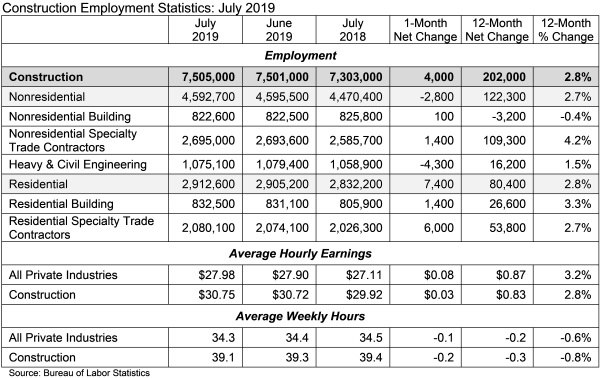